The directors of the MCC first ordered captain Menkenveld to sail to the Windward Coast. The instructions literally say:

“First you will attempt to call in at port Caap Monte, located at 6 degr. 28 minutes. There you will trade as many slaves as is feasible. From there up to Caap des Palmes you will go to all ports where it is possible to trade for slaves, trading back and forth along the coast and keeping this up for as long as possible. Provide yourself with a good load of rice to increase your food supply.

And when you cannot procure any more slaves on the Upper Coast, it will be necessary for you to move from Caap des Palmes or from the Greincust until Caap Lahoe and from there until Caap Tres Puntes, trading for as many slaves as are available and calling at all ports. You will continue your journey and trading as soon as is possible.”

Cape Monte and Cape des Palmas, now known as Robertsport and Harper, are located in modern-day Liberia For the MCC, this region was part of the Windward Coast, even though it was also known as the Grain Coast. Due to the low prices of the region, the MCC sent many of its ships there.

The captain was ordered to remain at the Windward Coast for as long as possible, and buy as many of enslaved Africans there as possible. Only when there were no more human beings to be had was he allowed to sail on, first to Cape Lahoe, then to modern-day Grand-Lahou in Ivory Coast, and from there to Cape Tres Points, now known as Cape Three Points in Ghana.

Ships who wished to trade along the Windward Coast signaled the coast by firing a canon, sometimes accompanied by lowering a sail. The Unity often lowered its fore topsail. Canoes would then row to the ship loaded with rice, water, and of course enslaved Africans. The latter were usually few in number at the Windward Coast. If no canoes appeared, the ship continued sailing a little further and would fire a new shot.

The First Human Being Bought

The man was traded against a number of goods from the cargo, such as guns, gin and liquor, textiles, tin bowls and knives. The total purchase price of these goods was 115 guilders. The blog shows which goods were traded per transaction, and the total worth of the goods. One transaction could concern only 1 person, but also 30 persons.

The transaction described above took place after a tax, or ‘custom’, was paid to the local ruler. This tax was paid in the form of goods. For the Caap Monte ‘dignitary’, current day Robertsport, it was liquor, tobacco, flamed beads, one glass and four snuff boxes. The captain of The Unity mostly paid ‘customs’ at the Windward Coast.

Shortly after the arrival in Africa, the carpenters on board The Unity built the first latrine for the enslaved people. That happened on the same day that the first African woman was bought, December 10, 1761. In the logbook the latrine was called the ‘slave house’. The latrine for the women was built on the back, or off board at the quarterdeck. The second latrin, for the men, was built two days later, and placed to the side of the waist.

A few days later the crew put together the galley for preparing the food for the enslaved Africans. It was also put in the waist, near the forecastle. Another modification to the ship was the partition built mid-ships.

In December and January large amounts of palm oil were bought at the coast for the enslaved Africans. At least 1 hogshead and 3 half aumes of ‘oil of the palm’ were brought on board. Spanish peppers were also bought for the Africans.

First mate Pruijmelaar also mentions other Dutch ships trading enslaved people from Africa. The ship Anthony Ewout from Flushing welcomed The Unity with five canon shots on 11 December 1761. The Unity thanked the ship by firing the same number of shots. The captain of The Anthony Ewout was captain Adriaan Sap – the ship was destined for Angola.

In the early morning of December 23, 1761, first mate Pruijmelaar saw the prince’s flag being raised on a newly arrived ship. Seven shots were also fired. The Unity answered with five shots, after which a boat was rowed to The Unity, and the identity of the new arrival was known: the ship The Guinean Friends, captained by Meijer from Amsterdam.

The first death on board was that of a crew member, sailor Roelof Siebers from Brewijk, Norway. Siebers had been ill for the entire voyage so far, as the captain writes in his letter to the MCC. Surgeon Petrus Couperus writes in his journal that the sailor had been ill for at least four weeks before the ship’s departure from Middelburg, and was unable to recover for the first month-and-a-half of the voyage. After this he was able to work for a short time, after which he began to cough heavily, and his body began to waste away. He died the day before Christmas 1761, near Little Bassa, Liberia. The crew sewed the body into sailcloth and put it overboard, accompanied by a cannon shot.

Possessions of a Sailor

After the funeral, the possessions of sailor Siebers were auctioned off to the crew. The proceeds were noted down in the muster-roll, and would be given to family back home. Siebers possessions on board consisted of a few items of clothing, two pairs of shoes, two caps and a hat, knives, a tin of tobacco, tobacco, a tea kettle and tea. The items fetched about 32 guilders, which would amount to 438 dollars in 2014. The death of the sailor was mentioned by captain Menkenveld in one of his letters to the directors in Middelburg.

The second crew member to die was Hans Cramer, the boatswain’s mate from Copenhagen. He was not ill, but fell overboard in the night of January 1, 1762, and drowned. The ship was moored at Buchanan (Grand Bassa) in Liberia at the time. The possessions of the boatswain’s mate and sail maker were auctioned off the next day, and consisted of clothing, shoes, knives, a tea kettle, as well as a sleeping bag and hammock. The goods fetched a slightly higher price than Sieber’s goods, about 546 dollars in current-day money.

Letter to the Directors

On New Year’s Day 1762 captain Menkenveld sent a letter to the directors of the MCC. His tone was not optimistic: he complained about the course of trade, since he had only been able to purchase a twenty or thirty enslaved Africans or so. According to the experienced captain, that number had been much higher in previous voyages to the same destinations. He wished to leave the Windward Coast immediately, but that was not possible: the cargo contained certain goods which had been taken specifically for this part of the coast.

Furthermore, the captain also complained about the price of the Africans. He was forced to pay more than on previous voyages, and also more than other captains. According to him, that was because two of the goods bought for the Windward Coast had been purchased at too high a price. These were the small barrels of gunpowder and the blue salempouri (cotton cloth). Expensive mistakes had been made, according to Menkenveld, which had now become his problem. There was also no point to taking the salempouri to the Gold Coast, since he could only rid himself of the cloth there at prices far below the purchase price.

Rather pessimistically, the captain concluded that he was forced to remain at the Windward Coast for at least two more months in order to get rid of his goods. After that he would sail towards the Gold Coast, and, should the situation be unacceptable there as well, he would sail past Cape Three Points. Because everywhere English ships, both arriving and departing, could be found.

Menkenveld was certainly exaggerating in his letter: The Unity would remain at the Windward Coast until January 22, 1762, giving a total of one-and-half months. 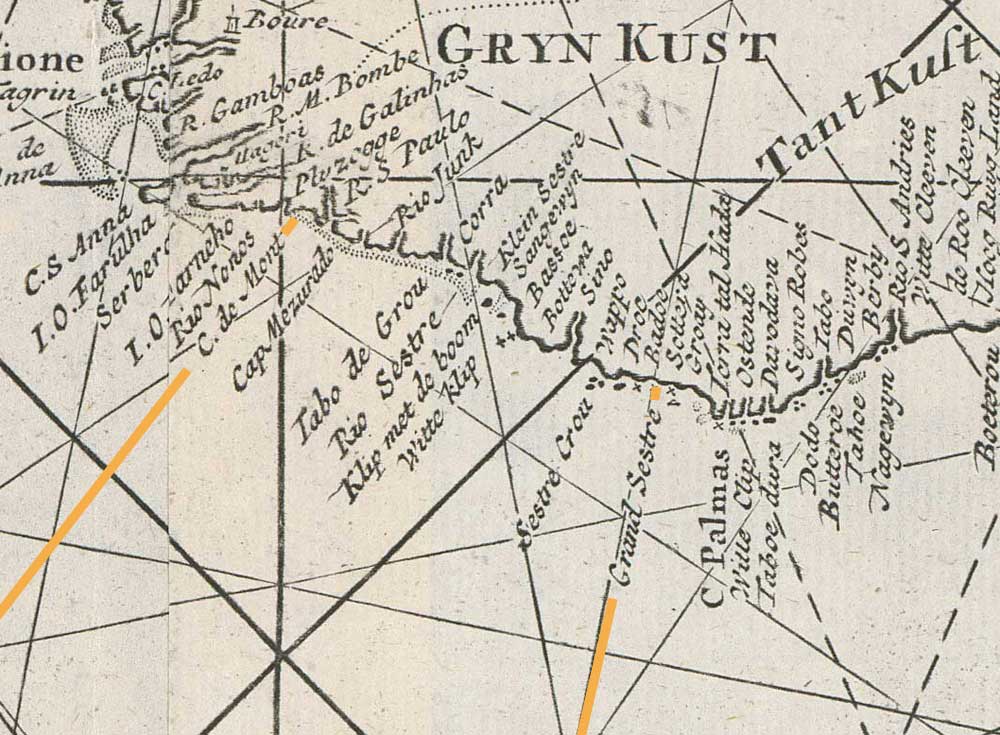