The crew of the ship the Unity originally consisted of 37 people, but one sailor, Antony Battram, remained home due to sickness. On the way to Africa, sailor Roelof Siebert died of illness. Two other crew members drowned at the coast of Africa: boatswain’s mate Hans Cramer and sailor Maarten Capper. At the start of the Middle Passage therefore, there were still 33 crew members left. Two of them would not reach the coast of America.

Master carpenter Poulus Kempe had a drinking habit. In Shama, Ghana, where he had to repair the rowboat together with the master carpenter’s mate Pieter de Gerol (also called Gerolf), both men got very drunk on the local palm wine. When they came back on board in Elmina they were very sick. To make matters worse the boat hit the breakwater (high poles in front of the coast) of Elmina and both man had to leave the ship again to repair it. When they returned their health had deteriorated even more.

Surgeon Petrus Couperus made every effort to heal the men, but nothing seemed to work. He sought the cause of death ashore, noting about master carpenter’s mate De Gerol: “I believe that the Africans have given him something”. Master carpenter Kemp had been ill the entire voyage, but the palm wine proved fatal. After the carpenter had repaired the boat in Elmina, Couperus wrote in his journal about Kempe:

“He came back on board with an advanced case of dropsy. I did my utmost best, but it broke through the scrotum. This was followed by fever, deliriums, and a loss of consciousness. All that was tried was in vain and he, since he was old, died on 10 of May 1762 in his 51st year.” – May 10, 1762

The body of Poulus Kempe from Hamburg was put overboard accompanied by a canon shot, after which the possessions were auctioned among the crew members. The auction’s revenue was destined Kempe’s dependents. It was certainly not insignificant: 106,50 guilders, similar to a purchasing power of 955 euros in 2013. The majority of Kempe’s positions consisted of clothing and pieces of textile. The rest included two rinsing bowls, more than 10 pounds of tobacco, two tobacco boxes, a box of tea and a quantity of coral.

Two days after the death of Kempe the main topmast stay broke and a rope snapped in the topmast shrouds. The main topmast stay consists of heavy ropes that support the upper part of the foremast in a forward direction. The topmast shrouds are the main ropes that support the lower part of the foremast. The master carpenter’s mate Pieter de Gerol was promptly promoted: Captain Menkenveld appointed him master carpenter that same day and raised his salary.

There were more sick among the crew: besides carpenter Pieter de Gerol, the sailors Jan Eward, Jacobus Rankin and second mate Jan Schutz had fever and complained of headaches. Sailor Jacobus Duinkerken suffered from dysentery and did not recover from it. The sailor from Aardenburg died on May 26, 1762

Training as a helmsman

Accompanied by a gunshot the body of Jacobus Duinkeren was put overboard on the morning of May 26, after which his possessions were auctioned in the afternoon. Besides the usual items of clothing there were some things among the possessions that shed more light on the sailor’s ambitions.

The presence of two notebooks, a writing box, a slate, a cross staff, penknife, pair of compasses, the book the ‘Schatkamer’ and four other books indicate that Duinkerken was receiving a training to become a helmsman. The ‘Schatkamer’ may be the navigational textbook ‘De kleene schatkamer, of een korte beschrijven van de konst der stierlieden’ (literally: ‘The small treasury, or a short description of the art of helmsmen’) by Abraham de Graaf, first published in 1680 in Amsterdam.

Furthermore Duinkerken possessed a frying pan, a kettle, two spoons and a coffee grinder. More remarkable were a wig and three parrots. The wig was bought by the cook, Thomas Ditmars, while surgeon Couperus became the owner of the  parrots. He paid 20 guilders for the animals, similar to a purchasing power of 179.34 euros in 2013. The inventory generated a total of almost 83 guilders (744 euros in 2013), which included a loan to a crew member.

Sailor as bank of loans

Usually money was borrowed prior to the auction of goods. Many of the loans on board of the Unity were provided by one crew member: cooper Adriaan Hillebrand. During the voyage he had outstanding loans with at least 13 crew members. It involved considerable amounts of money, with the highest loan being 100 guilders to the cooper’s mate Isaac de Vos. Cooper Hillebrand loaned a total of over 300 guilders (2690 euros in 2013). Each loan was recorded on paper and carefully preserved, perhaps straight to the ship’s administration.

The Middle Passage was monotonous and the lack of space and the presence of the captives put the crew under pressure. Frustrations and tensions surfaced on May 23, 1762.

Boatswain Pieter had been taunting first mate Pruijmelaar for days. He didn’t follow his orders immediately or properly and he always had a cheeky comment or reply ready. On the morning of May 23, after prayer (so around 8 a.m.), Pruijmelaar ordered him to take in the topsails on the foremast and the main mast, a job which required two people per mast, or the canvas could tear.

Instead, the boatswain, who was in charge of the sailors, gave the task to two sailors, assigning only one per mast. Pruijmelaar reprimanded him sharply, after which Pieters started cursing and ranting. Finally, when the men reached the quarterdeck from the waist deck captain Menkenveld intervened.

He ordered the boatswain to hold his tongue, which the boatswain obstinately refused. “Shut up!” the captain ordered again. “I cannot and do not want to shut up” shouted the boatswain. On hearing that, the captain picked up the garbage shovel and hit Pieter twice, at which point the boatswain declared that he no longer wanted to be in service. Menkenveld was fine with this. He had already reprimanded boatswain Pieters twice before and had had enough of his undisciplined behavior towards the helmsmen.

After the meal of the enslaved Africans (around 11 a.m.)  the boatswain was summoned into the cabin with the helmsmen. He was offered one last chance, which he took. He claimed never to have resigned, “and thereby he took back his words”, said first mate Pruijmelaar.

First page of the journal that was kept by surgeon Petrus Couperus. When a crew member died he drew a skull with an hourglass above it, a sign for the impermanence of life. Zeeland Archives, Archives of the MCC, inv.nr 390. 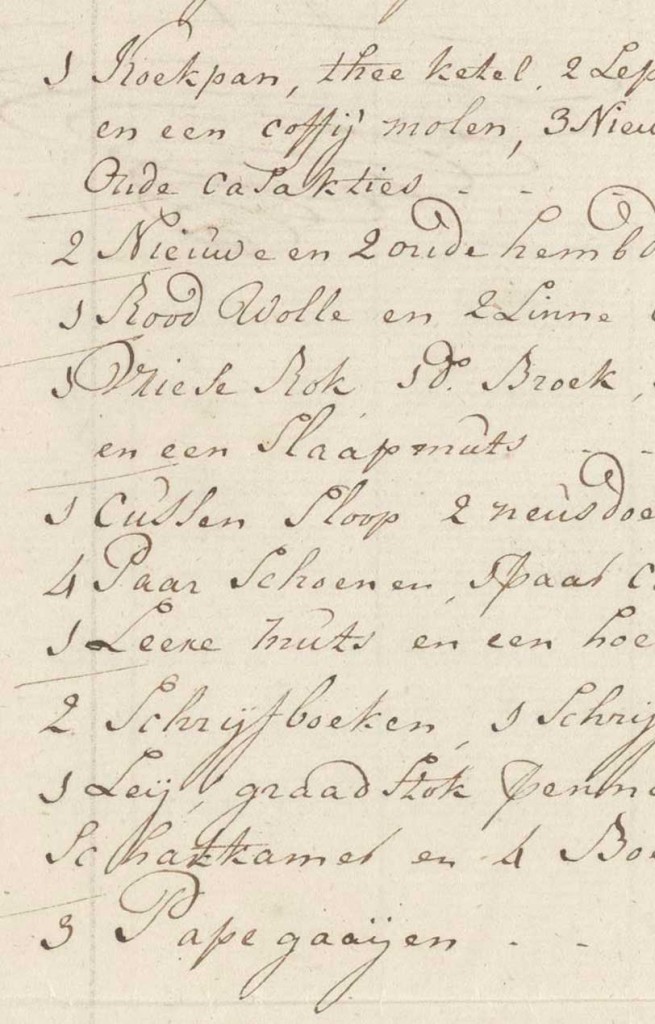 Excerpt of the auction report of the possession of sailor Jacobus Duinkerken. Zeeland Archives, Archives of the MCC, inv.nr 388.