Home > Stages of the voyage > Homeward Bound > A Final Note

On reaching the roadstead of Rammekens the sea voyage was officially completed, but the enterprise on the whole was far from finished. How did the sale of the return goods procede? Was the voyage profitable for the MCC? And what did the crew earn?

Unfortunately very little information is available in the archives on the fate of the enslaved Africans. Perhaps a few of them managed to flee in the uprising in Berbice. The majority of the enslaved people however, will have spent the rest of their lives in captivity, working as forced laborers on one of the many plantations in Guyana.

The return goods of The Unity were auctioned off on different days in Middelburg. On April 12th, 1763, the board of directors decided not to organize a separate auction for the goods of The Unity, the reason being that The Unity had brought back relatively small amounts of ivory and tobacco.

Instead, the directors decided that the ivory would be sold together with the return cargo goods of the ship the Petronella Cecilia, even though that ship was not owned by the MCC.

The tobacco was brought to an auction on May 2nd, 1763, which was organized by estate agent Adriaan van Dijk for some private shareholders in Middelburg.

The directors Lantsheer and Reijnders were apparently allowed first choice of tobacco. They bought five rolls, while the remaining 149 rolls were entered for auctioning by Van Dijk. He divided the 149 rolls into 32 different lots. According to the ship’s book, the tobacco was sold for a total of 284 Flemish pounds.

The tobacco had been wrapped in animal hides, which were sold as a single lot on May 5th for almost 7 Flemish pounds.

The ivory, consisting of larger and smaller elephant’s tusks and pieces of ivory was auctioned on June 2nd, in 6 different lots. The buyers paid a total of 862 Flemish pounds. The MCC directors were very satisfied with the profit, and in the next meeting the minutes note “that the sale had turned out extraordinarily well (according to quality), with good selling prices.”

Buyers of the Tobacco, Animal Hides and Ivory

Contrary to the sales of tobacco and coffee, the third voyage of The Unity has left no archive documents of the sale of sugar. Neither does the ship’s book mention the sugar sales separately.

The final accounts were drawn up at the end of December, 1763, and added to the ship’s book.

On the credit side the following were noted, in order:

On the debet side the following were noted:

Again therefore captain Jan Menkenveld had successfully run a profitable voyage for the MCC. He was perhaps the most successful slave trade captain in service of the MCC: of the seven voyages he led during his time with the MCC, six made a good profit.

The accounts were drawn up before the end of the calendar year in which The Unity returned home. The company however, did not receive the moneys of the sales of enslaved Africans in Guyana until much later.

The first Africans were sold via auctions in Berbice, Guyana. Captain Jan Menkenveld authorized the auction master Abraham Wijs to act in his stead in receiving the payments. To that end, Wijs signed an obligation in which he personally vouched for the auction profits. Whether Wijs actually transferred the money remains unknown, although the archive documents of The Unity’s third voyage do mention that Abraham Wijs, after his return to Amsterdam, cut and ran – and that no one knew where he had gone.

The last Africans of The Unity were sold by auction in Essequibo, Guyana. The buyers were to pay in three installments, the first of which partly consisted of sugar. The rest could be paid in cash or through letters of exchange. The deferred payments were usually only satisfied years later, the last one in 1766.

The crew was paid in April 1763. The five highest-ranking crew members also received bonuses from slave sales and cash recognition payments. These consisted of respectively a percentage of the sales from enslaved Africans and a percentage of the profit of the voyage.

The amount was divided according to rank. The captain received the largest percentage: per sold African he received 80 shillings. The first mate and master surgeon received 24 shillings each per sold slave. The second mate received 10 shillings, and the third mate 6 shillings.

If the voyage proved profitable, the officers also received a percentage of the profit. To calculate that, the costs of the voyage, consisting of:

Over 3.5 years after the completion of The Unity’s third voyage the last bonusses were paid to the highest ranking crew members. Clearly, the captain made a lot of money: he was responsible for the ship, the cargo and the crew. Not just during the voyage but also before departure – the captain played an important role in deciding the composition of the cargo.

The bonusses of slave money and recognition money were considerable. Together they exceeded the captain’s salary, whereas the first mate earned about as much in bonusses as in salary.

All of the above does not constitute the full income of the highest-ranking crew members. The private trade conducted during the voyage remains invisible. Though these officers were forbidden from conducting trade for personal profit (see the instruction for the captain, nr 15), but this certainly occurred. In the end, it would be the cause of Menkenveld’s dismissal. 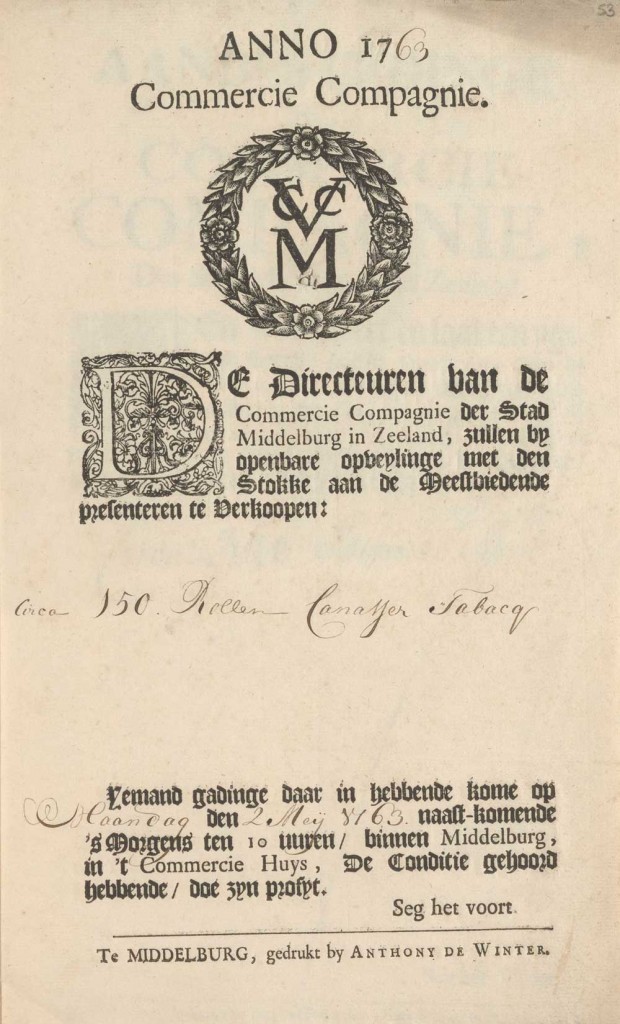 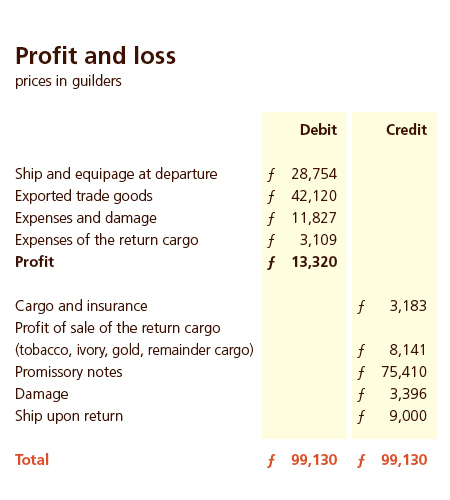