On its departure, The Unity sailed via the Westerschelde, the North Sea and the Atlantic Ocean to Liberia, at the time located on the African Windward Coast.

Thursday October 1st, 1761 at 6:30 a.m. captain Menkenveld raised the best-bower. The entire crew was present, save one sailor: Anthonie Battram was sick and remained on shore. At about nine o’clock the crew hauled in the boat, the pilot Jan Mulder came on board, and the small-bower was raised as well.

At ten o’clock The Unity passed the city of Flushing. The wind shifted a lot, even died down. The tide rose, and at about eleven o’clock the anchors were dropped near the gallows of Flushing, by Dishoek.

The anchors were raised and the sails were hoisted the next morning, at ten o’clock. The pilot guided the ship safely along the sandbanks to the North Sea. The sea-lane which they followed, the Deurloo, in the mouth of the Western Scheldt was flanked by two sand banks: Noorderrassen and Droge Raan. The route was marked by seven numbered barrels.

On reaching the last barrel The Unity was welcomed by five gun salutes. These had been fired by the ship Essequeboos Welvaaren, captained by Gerrit Eelke Boek Gerrit Boef from Vlissingen. She had also begun her voyage for Africa. The departure of both ships was reported in the newspaper of Middelburg, the Middelburgsche Courant.

Captain Menkenveld thanked his colleague with five gun salutes. At 1:30 p.m. the pilot left the ship, in possession of a letter from captain Menkenveld to the board in Middelburg. The ship The Unity was finally sailing for open seas.

The first mate carefully noted down the well-known and often dangerous cliffs and capes of the Channel: from Calais the ship sailed along the English coast, passing Dover, Winchelsea and Beachy Head. It was busy in the Channel. Multiple ships were seen and passed every day, each of which were also noted in the logbook.

Five days after departure the ship passed the Cap de la Hague and the Casquets near France.  Here the bow anchors were raised, and they lost sight of land for a while. The weather was already worsening, with increasingly heavy wind and rain. The next day the first mate began his sea navigation: measuring and keeping track of the position at sea.

The storm hit them on the 9th of October. At 1 a.m. a heavy storm rose, causing the ship to have to take down all of her sails in order to keep as much control over the ship as possible. The pumps were manned throughout the rest of night, since a lot of water had ended up in the constable’s cabin. The first mate also noted the loss of one of the booms, and two lanterns.

The storm raged worst between the 9th and 12th of October, and the ship continued to struggle with flooding and problems with the sails. On the 20th the crew were able to see some ships again, and finally land: Cabo Ortegal, by Spain. It had been fifteen days since the last rainless day.

Sick People on Board

The surgeon was responsible for the health of all crew members and enslaved persons on board. He carefully kept track of his patients and the recipes in a logbook. The entries showed the symptoms per case, and the recipes he prescribed (sometimes multiple times per patient, if no changes were apparent). His first patient arrived two days after the departure from Rammekens.

Three weeks later the sick-bay contained seven crew members: three sailors, the master carpenter, the cooper’s mate, the corporal and the cook. Most of the cases did not seem very serious, and varied from nausea to chest pains, heart palpitations, coughs and an occasional infectious disease.

There were a few more unusual cases: in november third mate Adriaan de Puit was admitted with complaints of stomach aches. Couperus soon found out that the boy was ‘rife with worms’, and gave him a laxative. Adriaan then lost a worm of between 5 and 7 meters (15 and 21 feet long), and even that one was ‘still broken off’. The sailor had to return three times for his worm treatment, until he was declared ‘fully recoverd’ on the 12th of December.

Calmer weather followed in the weeks between Spain and Africa, though the Unity continued to meet many other ships, sometimes up to seven a day. The relatively calm weather, interspersed with the occasional trade winds, was used for some very necessary maintenance and cleaning, and to prepare the ship for receiving and housing the enslaved Africans.

Maintenance consisted among other things of applying resin to the woodwork: the masts, yards, wooden blocks, decks and corridors. Tarring of the outside of the ship was also important to counter wood decay.

On nearing het coast of Africa, the first mate often mentions ‘swirling currents’ and drifting ‘filth’. Presumably the color and currents of the water gave an indication of the distance to the shore.  When they near Cape Monte, Liberia, the first land they see in Africa, this happened more often: on the 29th, a week before arrival, they see a large piece of wood, and on the 4th even a whole tree. On the 6th of December they finally see land, and drop anchor. 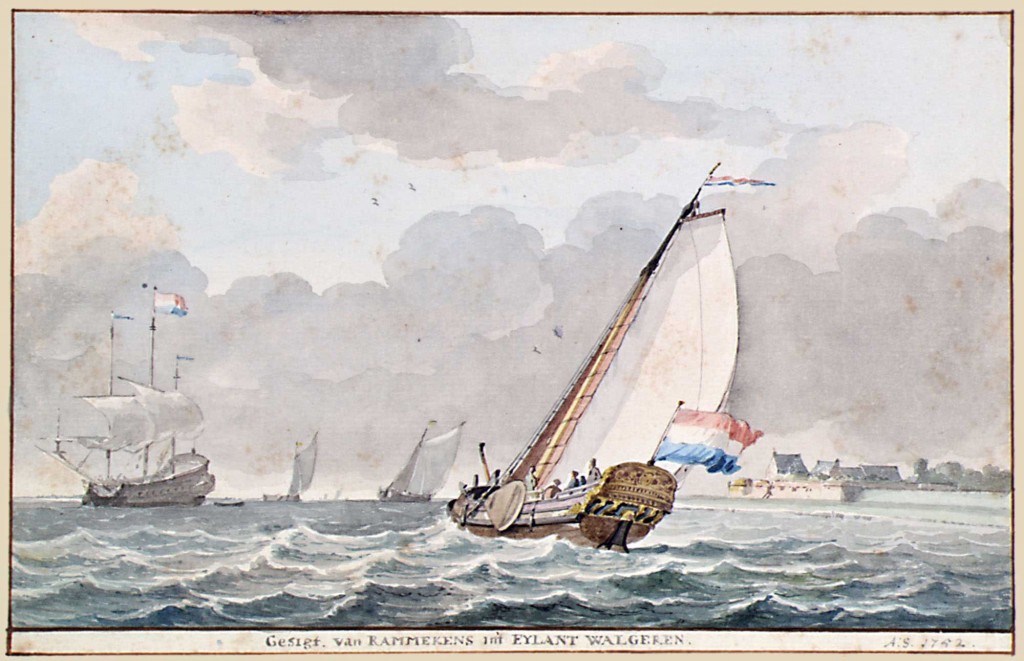 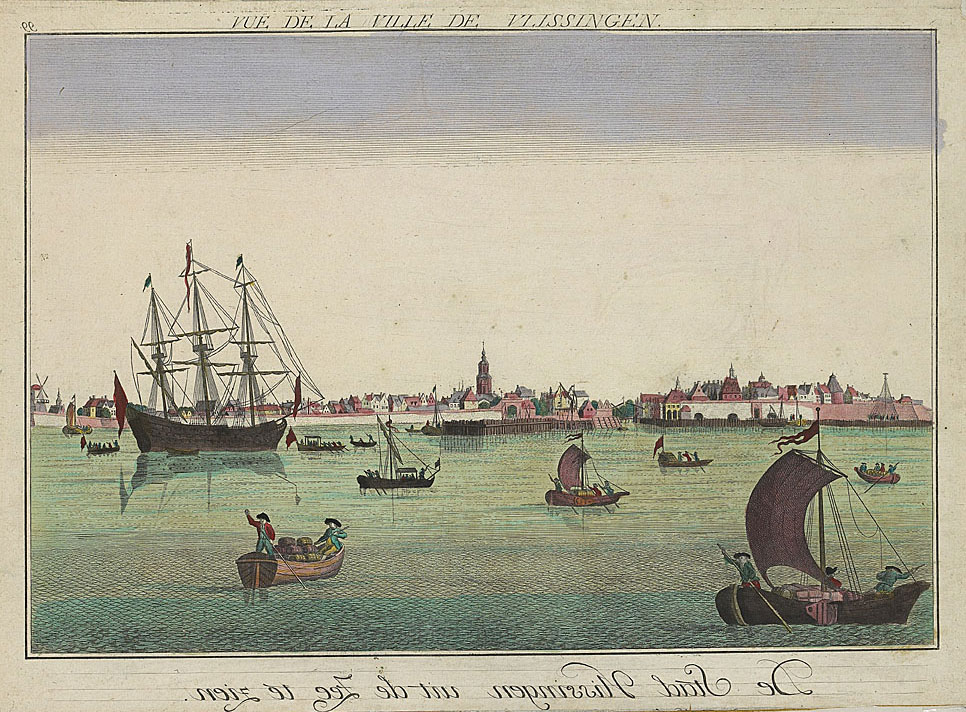 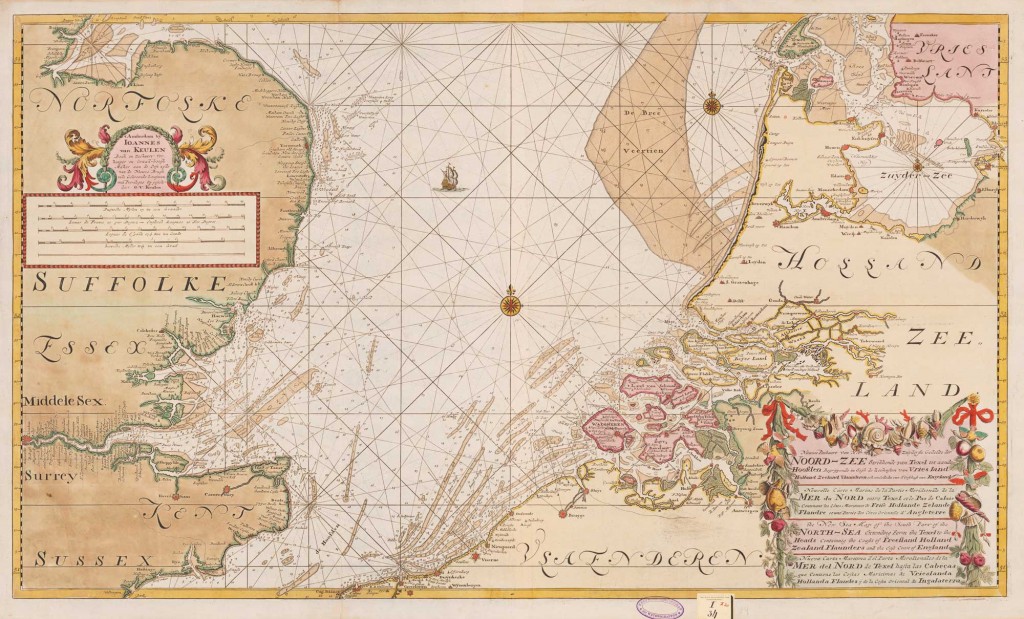 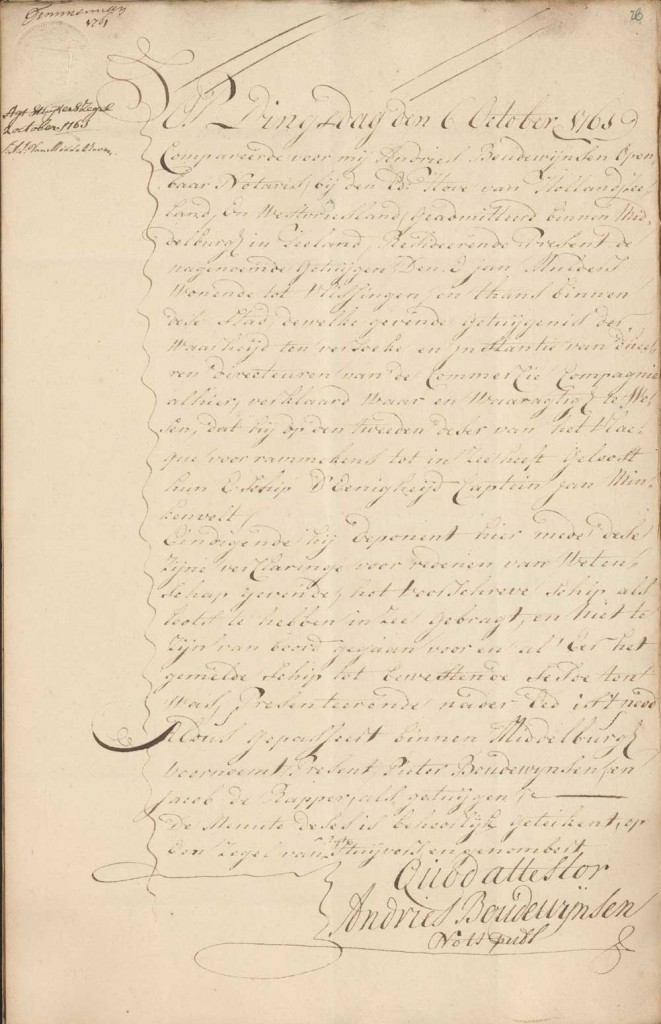 Notarial deed signed by the pilot
Notarial deed in which the pilot declares that he conducted the ship The Unity into The Channel on 2 October 1761. Zeeland Archives, Archives of the MCC, inv.nr 149