The final stage of the voyage along the coast of West-Africa was described as follows by the directors of the MCC: from Cape Lahou (now known as Grand-Lahou in Côte d’Ivoire) to Cabo Tres Puntes (Cape Three Points, past Axim in Ghana), continuing for as long as necessary. Along the Gold Coast in Ghana the last chances at purchasing enslaved Africans presented themselves, before The Unity would begin its Middle Passage. The Unity remained in the region from February 23, until the beginning of May 1762.

Near the beginning of March The Unity approached the first forts of the West India Company (WIC), now Ghana. At Cape Apolni the captain left the ship to sail on by boat, to Axim. The name ‘Aploni’ was a derivation of ‘Appollonia’, the name which Portuguese explorers gave to the region. In Axim, the captain probably met up with Jan Pieter Theodoor Huydecoper, a WIC dignitary.

Leadership of the WIC-possessions in West Africa in 1760-1763 was in the hands of David Pieter Erasmi, who delegated to Jan Pieter Theodoor Huydecoper, Hendrik Walmbeek and Barreveld. Their names can be found in the trading book of The Unity: the captain bought human beings, ivory, water, fire wood and lime juice from them.

The trading book gives the names of the contacts and WIC dignitaries from a variety of places: Huydecoper in fort San Antonia in Axim, Barreveld in fort Batenstein in Butre, and Hendrik Walmbeen in fort St. Sebastian in Shama. As director-general, Erasmi lived in Elmina Castle. All of these forts were located within a few dozen miles of each other.

It is unclear when exactly the captain did business with the WIC or with an WIC dignitary who acted for himself. WIC dignitaries often traded privately as well, as was known of Jan Pieter Theodoor Huydecoper. He was a son from the rich regent family Huydecoper, but had incurred so many debts that he fled to the Gold Coast, where he arrived in 1758, with the aim of becoming rich quickly. Captain Menkenveld bought 64 elephant tusks from Huydecoper in Axim.

A few years later Huydecoper would be promoted to director-general, and move to Elmina Castle. He then sent out a boat down the coast to purchase enslaved Africans, who were locked up in the dungeons of the castle. Source: Engelen, M., Het Kasteel van Elmina (2013, Amsterdam)

On arrival at Axim The Unity greeted the fort with 7 shots, which were answered by five from the fort. Captain Menkenveld remained ashore for quite some time at Axim, from March 4 till March 20, 1762. He undoubtedly spoke with the Flushing captain David Sylonimi, who had previously arrived with his ship The Jacob Maria.

Water barrels and casks were used to store water, for which staves had been brought from Zeeland. The barrels were put together by cooper Adriaan Hillebrand and cooper’s mate Isaac de Vos. Their job was summarized by Pruijmelaar in the logbook with the words ‘assembled some barrels’.

The first two barrels were put together on December 13, 1761, when the ship was near Monrovia, Liberia. All of the others were only built on March 12, 1762, near Axim, Ghana, and the days following before the ship began its Middle Passage. According to the logbook, the coopers built 33 barrels in total. In addition to those, 9 empty barrels were bought in Elmina.

Except for the enslaved Africans, Menkenveld bought in Axim the largest load of elephant’s tusk of the entire voyage: 64 pairs in total. The boat also received some maintenance ashore. On leaving Axim, The Unity again fired off five shots.

After departing from Axim, The Unity passed by fort Hollandia, now known as Princess Town. The ship then anchored at fort Batenstein in Bacteroe, now known as Butre, where captain David Sylonimi had just raised his anchors for departure.

After firing five canon shots as a greeting, the captain took the boat ashore. In the fort he probably met WIC dignitary Barreveld, from whom he bought more Africans.

At Fort Batenstein the second African on board died. The first had drowned, perhaps in an escape attempt, at the departure from Grand-Lahou. The second, also a man, died ‘out of his senses’, according to surgeon Couperus, who was unable to determine the cause of death.

Having arrived in Shama, The Unity anchored at fort St. Sebastian. Here the captain probably met Hendrik Walmbeek, from whom, among others, human beings and lime juice were bought. The Unity remained in Shama for a longer period of time, from March 27 till April 11, 1762, and underwent some maintenance.

The first death by violence occurred on board at this time. The number of prisoners had almost reached 300, all of whom were from different peoples, various regions and spoke different languages. Fights often occurred on board and with one of these, on the ‘tween deck, the first victim fell. Surgeon Couperus had the man, groaning from pain, brought out on the waist deck for examining. He applied a variety of remedies, and “also tickled him below the nose with a feather, but, nothing helping, he died the other day”.

In order to prevent scurvy, the captain ordered the purchase of lime juice. All of the sick received this as a medicine – their mouth was also washed with it. It was not enough for one little girl on board The Unity though. She died on April 14, “very thin and weak”.

When The Unity left for Elmina in April with a sick captain on board, the two carpenters remained behind to repair the leaking row boat. The captain warned both of them not to drink – according to Couperus the head carpenter Poulus Kemp was an alcoholic. Neither of them could resist the palm wine however, but that wine left a bitter memory. Very ill, both of them left for the ship, which had by that time reached Elmina.

The last stop on the West-African coast was Elmina Castle. Here the director-general of the WIC, David Pieter Erasmi, lived. The Unity remained at the Elmina coast for quite some time: from April 12 till May 8. Captain Menkenveld also recuperated in these weeks.

The Unity was not the only Dutch ship at Elmina. The ship The Publicola from Rotterdam, captained by Van Bel, and the Jacob Maria from Flushing, captained by David Sylonimi, had also moored there. Both ships were destined for Suriname, and others were on their way. The captain received news in Elmina that the captains Den Hollander, Casteleijn and Hermans were at the Windward Coast at that time.

The final enslaved Africans were bought in Elmina, all of them men. As with all ships with enslaved persons on board, they tried to escape. This also happened on April 22 and 23, 1762. First, two men disappeared without anyone noticing. The first mate assumed that they had jumped over board, like the third man had done. The chance that the men would reach the shore alive was small. The tides were treacherous, and the surf dangerous – and there were many sharks.

Supplies for the Middle Passage

Because the ship would begin its Middle Passage soon, the time in Elmina was used to purchase provisions and goods for the enslaved Africans.

24 chests of ‘mealie’, a kind of grain, came on board, as well as 200 pounds of tobacco and 18 gros short pipes. The prisoners were allowed to smoke during the day. The short pipes were also known as ‘slave pipes’.

The captain also bought lime juice and 5 aumes (= 200 gallons) were loaded on board. The juice was used to prevent scurvy, as well as sprayed on the ‘tween deck and between the bunks. The first time that happened was in Grand-Lahou (Cape Lahou) in Ivory Coast, and later in Elmina.

In order to dress the Africans 80 pieces of cloths, or loincloths, were brought on board.

A lot of water had to be brought on board for both enslaved persons and crew members. This was delivered to the ship from several places around Elmina. The water was kept, among others, in 33 barrels which the coopers of The Unity had put together, as well as 9 empty water barrels bought specially for that purpose.

Trade according to the Captain

Towards the end of April the captain was finishing his business ashore, and the crew was beginning to prepare themselves and the ship for the Atlantic crossing. In order to inform the directors in Middelburg of the current situation the captain wrote two letters (May 1 and 2, 1762). He wrote of the purchase of people, 326 persons in total (7 of whom had died), and the purchase of ivory, a total of 3723 pounds of elephant’s tusks, and 333 pounds of scrivellors (small tusks, or pieces of tusks).

Again the captain complained of prices. In Elmina the selling prices of the textiles were much lower than those in the homeland. The fact that some goods remained unsold was blamed on the presence of English merchants: “trade is bad here…because of all the English goods”. According to him the English ruined the market by selling their liquor too cheaply – even the demand for gunpowder was disappointing. Only the guns still sold relatively well.

Finally, the trade in gold was virtually non-existent due to inland tribal wars – “the war which the negroes fight among themselves here” -, so that very little gold actually reached the coast. 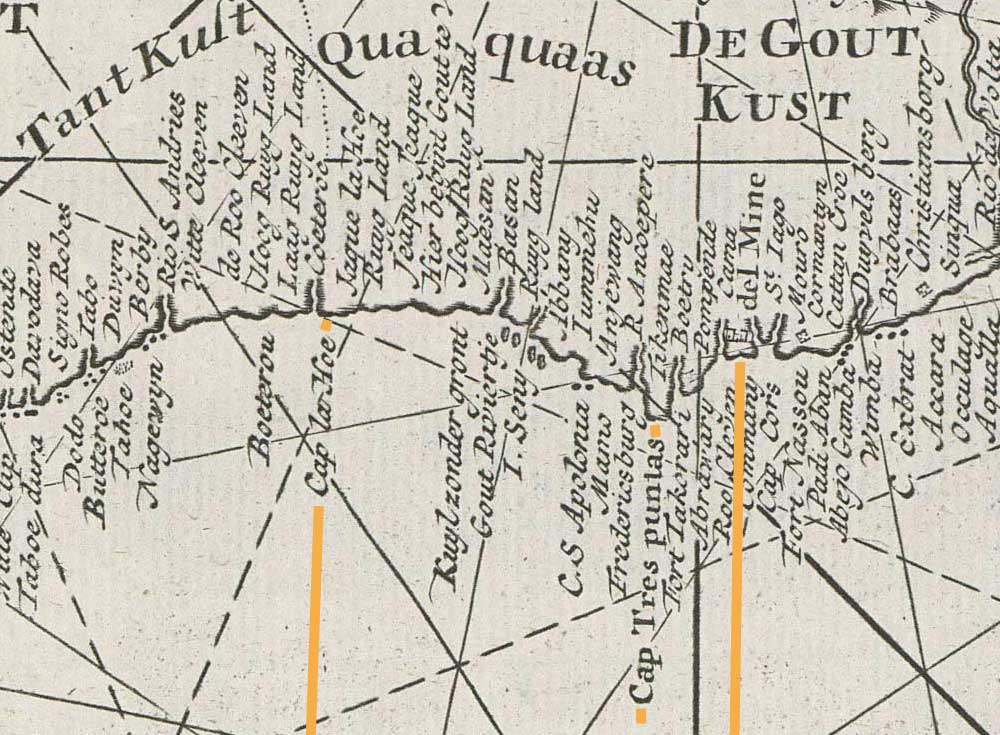 The ship the Unity at the Tusk and Gold Coast
Between the orange markers: the destinations of the Unity from the last part of the stage along the coast of West Africa, including places at the Gold Coast. Detail from a West Indian sea chart, around 1728. Zeeland Archives, Collection Image and Sound, inv.nr 636. 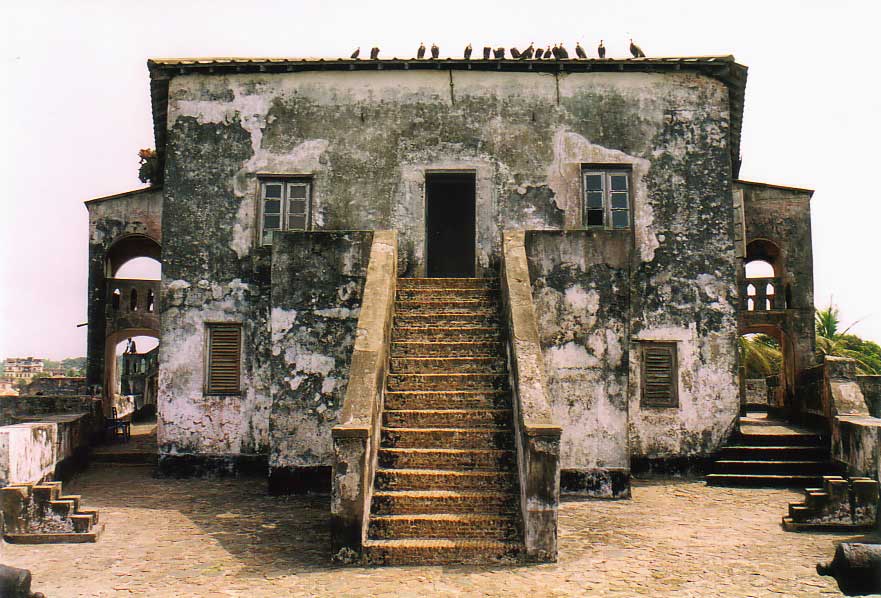 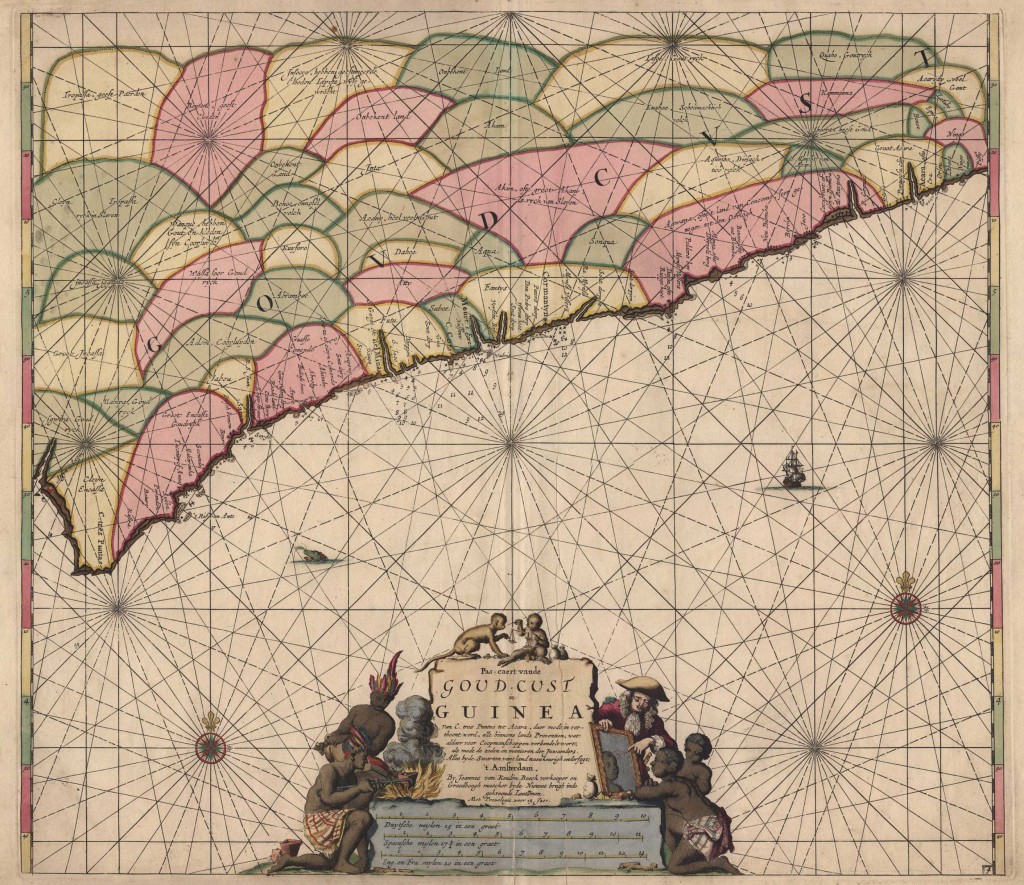 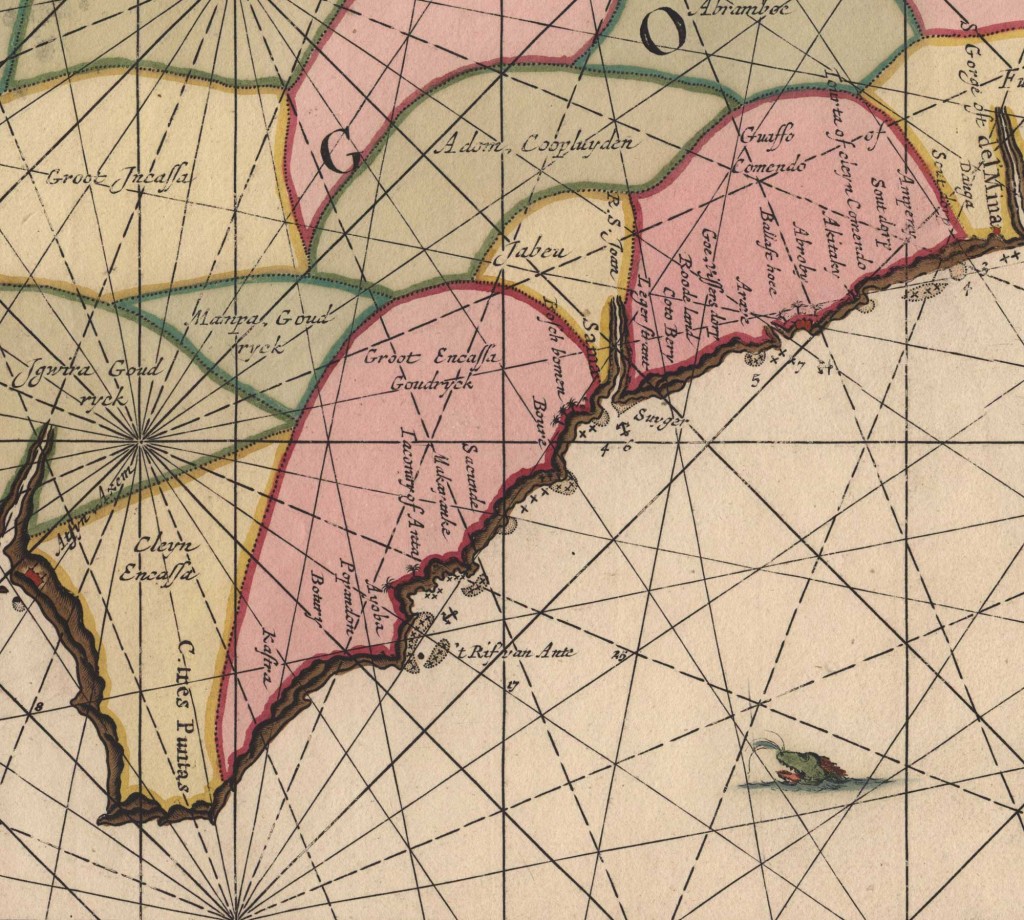 Part of the Gold Coast that was visited by the crew of the Unity. In the west is the fort of Axim and in the east the castle of Elmina. Detail from the chart of Guinea above. Zeeland Archives, Collection Image and Sound, inv.nr 592. 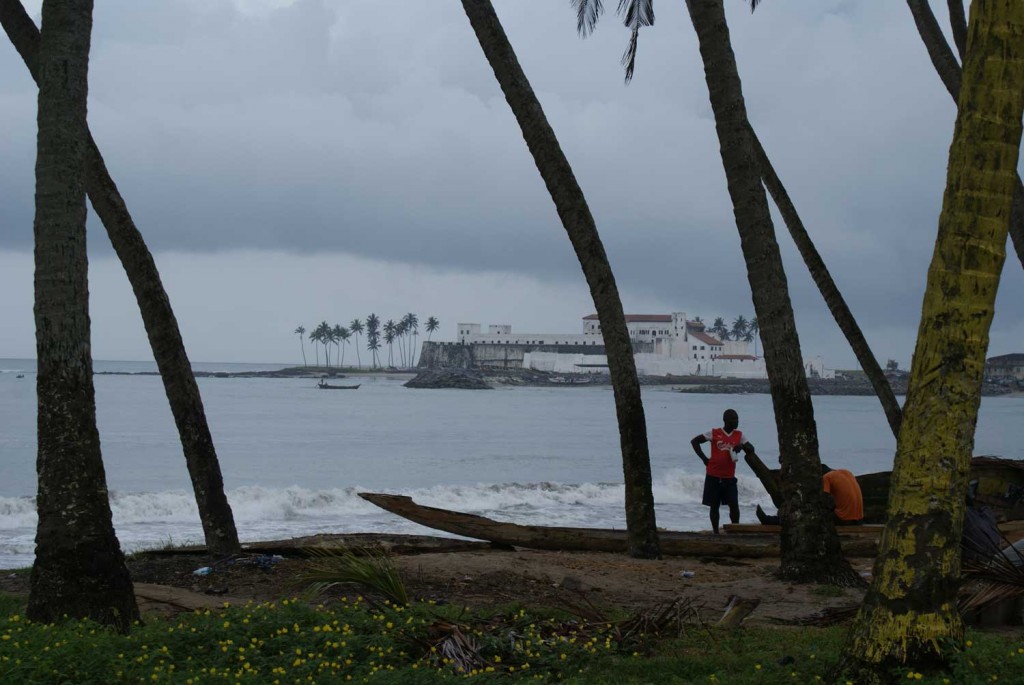