After the return of her previous voyage the ship The Unity underwent repairs where necessary. Ship’s parts were replaced or repaired at the Middelburg shipyard.

The supplies needed for the ship were restocked for the next voyage and the spare parts were added. All of the ship’s supplies can be found in the ship’s inventory.

The ship’s inventory of the third voyage of The Unity has been preserved. Significantly, this inventory was printed, not handwritten. The ships of the MCC therefore received a more or less standard package of supplies – only the amount and price of each item needed to be filled in. Other, non-printed goods to be taken were added by hand. Additionally, each item was marked as new or used.

The inventory consisted of:

‘Slaves’ in the ship’s inventory

The fact that the ship was fitted for trade in captured people is also reflected in the ship’s inventory. Among the constable’s, steward’s, sail maker’s and cook’s goods are various other goods which show the true nature of the voyage.

A ‘slave chain’ and shackles can be found among the constable’s goods:

Both the chain and shackles had been used before, but the rivets were new.

Among the steward’s goods are 4 tin pints ‘for the slaves’. These are tin jugs, each able to hold a pint. A Middelburg pint is 0.46 liters. (An Amsterdam one 0.6 liters).

A ‘water hose for the slaver’ is named among the sail maker’s goods, as well as 4 topgallant sails. These sails could be stretched over the deck as protection against the sun and rain.

The food for the enslaved Africans was prepared in a separate galley. This ‘slave galley’ was constructed during the voyage. Stones, lime and sand were therefore included among the cook’s goods, as well as a few other items for the slaves:

The steward’s book documenting all of the foods, or ‘victuals’ on board has not been preserved for the third voyage of The Unity, but a few surveys of diverse goods are present. One of these records the food stocked for the voyage, the duration of which was estimated at 20 months: bread, flour, barley, various kinds of peas, beans, beef, ham, bacon, stock fish, various kinds of cheese, salt, various kinds of butter, oil, prunes, raisins, sugar, mustard seeds, coffee beans, black pepper, nutmeg, cloves, mace, cinnamon, brandy, gin, red and white wine, vinegar and various kinds of beer.

Food was also stocked for the enslaved persons who will come on board in Africa: 200 bags of barley of 60 kilos each (according to Middelburg weights), 280 bags of beans ‘Rysselaarsbeans’ and 2 aumes of ‘old meat for the slaves’. 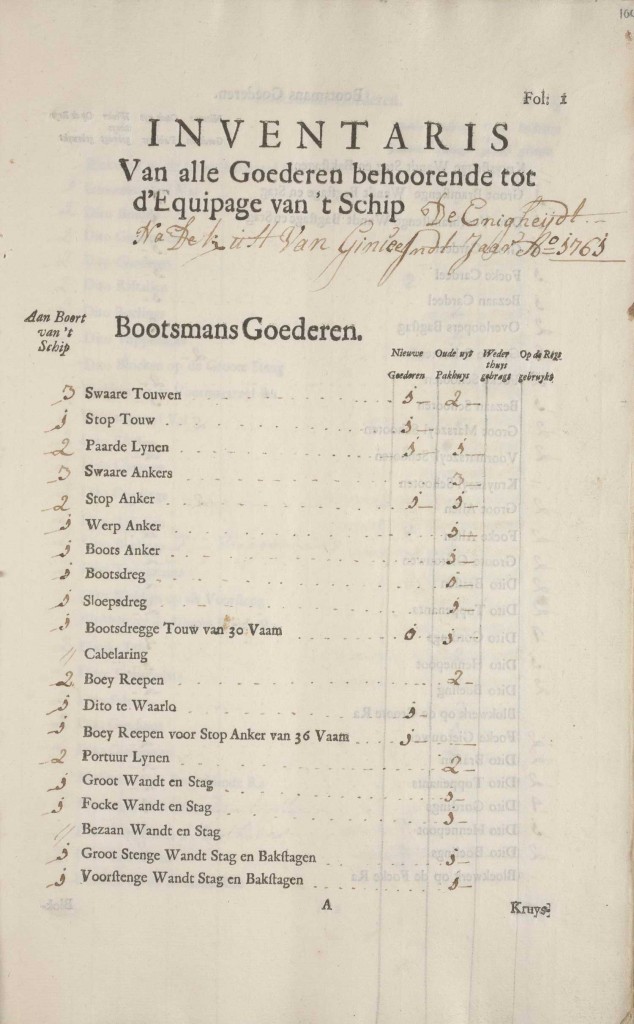