Home > Stages of the voyage > Caribbean > Auction at Berbice

When The Unity had arrived in the Berbice Colony the organization of the auction could begin. This required quite a lot of work, as can be seen from the expenses listed on the transactional account. As per the further specific instructions Abraham Wijs was hired as auction master.

“You will consult with his Honorable for the sale which is of most interest to this Compagnie.  Furthermore, you will request his Honorable counsel and assistance insofar as is necessary.”

Abraham Wijs, also the secretary of the colony, provided the white paint for painting announcements, for example. He also took care of the distribution of the auction letters; a kind of auction catalog in which the living merchandise was described. A drummer was hired to announce the news in the colony. Wijs also supplied foodstuffs such as fresh meat to the captain of the Unity.

“For the sale of the slaves brought there, a public venue is probably best; therefore choose that. And if you find that the entire human cargo can be sold at once for a reasonable price, you will sell it there as a whole.” – further specific instructions

During the first auction, all children were sold, together with their (step)mother as usual. It concerned six small children, from infants to children up to approximately 13 years old.

The enslaved Africans were bought by 41 different buyers. Sometimes the buyers were listed under the name of the plantation. Among the buyers are secretary and tax master Eilardus Harkenroth, superintendent general Willem Schook and pastor Ramring. The auctioneer himself, Abraham Wijs, also bought at the auction he led. The buyers were only allowed to bid if they had a guarantor. The guarantor paid if the buyer defaulted. The guarantors were without exception one of the buyers.

The gains made on the sale of the enslaved Africans benefited in part from the highest rank on board the Unity. How much, that was already laid down in advance in the captain’s instruction:

Expenses were involved in staying in Berbice and organizing the auctions. For example, the captain paid for the rental of tables and benches in use during the auction. He also bought pipes, tobacco, food and drink for the potential buyers present. Finally on the list are the “consumed costs” or accommodation costs of the captain on shore, consisting of overnight stays and meals. Captain Menkenveld spent the night with Hendrik Jansen Buse who was possibly an innkeeper. Buse himself bought 2 slave goods from the Unity; a man and a girl. All these expenses can be found in the trading book.

There was a lot of drinking and eating during the auction. The 41 buyers and other attendees together drank 32 bottles of white wine, 11 bottles of red wine and 44 bottles of beer. It is also known how much tobacco and pipes were used. Attendees used 48 pipes to smoke 2 pounds of tobacco.

Used at the auction:

The second auction on July 22 was interrupted by the captain because the proceeds were disappointing. “Our captain cancelled the auction early because the slaves were sold for too little money”, as noted by first mate Daniël Pruijmelaar. This matches the instructions which Jan Menkenveld had received from the MCC directors:

“However, if you notice that this [selling all the slaves at once] would decrease the prices too much, you will save a suitable remainder of 80 to 100 slaves and sell them in the colony of Essequebo and Demerary, also at auction.”

In the further specific instructions the directors set the following conditions with regard to the payments of bought Africans:

“on condition of payment in sugar which will will be loaded on Your Honour’s ship as soon as possible. Otherwise, you can pay in bills of exchange in Berbice”

A bill of exchange was a written order of payment – a promise to pay in the future. However, it would be years before the MCC received the money for the last bills of exchange.

Because the captain was in a hurry to sail to Essequibo and sell the remaining enslaved persons there, he authorized auction master Abraham Wijs to act in his place. The buyers of the enslaved Africans paid him in bills of exchange. On July 27, Abraham Wijs wrote in an obligation that he owed the MCC directors the total auction proceeds.

“Due to the public auction of the slaves of the cargo of the ship The Unity, captain Jan Menkenveld, I ow your honors  ƒ 34.348:8:-, with the promise that I will remit this to your honors with the first ship, as indicated by the transactional-account to captain Menkenveld.”

However, due to sickness and many deaths in the colony he had been unable to collect the money so far.

“Since two-thirds  in this colony are either sick or dead I have only been able to collect about half of the bills.”

He promised he would send the remainder of the money with a ship that would depart a week later.

On leaving Berbice, the Unity lent six naval guns to Governor of Hoogenheim at Fort Nassau. This probably had to do with the tense atmosphere in the colony. Just before Menkenveld and his ship arrived in Berbice, a small uprising had taken place. The continous disease in the colony, resulting in the high death rate, combined with poor governing, led to a potentially explosive situation. Because the fort badly needed repairs, and could barely be defended, The Unity lent out her guns.

“we left our 6 guns ashore, since the governor needed them for the country, and return them to us with another ship when he had finished using them.”

As soon as the Unity had arrived in Berbice, Captain Menkenveld had written to his contact person in Essequebo to inquire about the market prices of enslaved people there.

“I also wrote the lord secretary Spoor in Essequibo upon arrival here in the river, with the request for information concerning the market and prices of the slaves there. Since the slaves were selling for higher prices there I will leave with the remaining slaves for Essequibo.”

On July 27, 1762, five days after the second auction at Berbice had finished, The Unity raised anchor and departed for Essequibo. This was not an arbitrary decision. The further specific instructions contained orders for the ship to sail on to Essequibo should the prices in Berbice be too low.

“However, if you notice that this would decrease the  prices, you will save a suitable remainder of 80 to 100 slaves and sell them in the colonies of Essequibo and Demerara.” 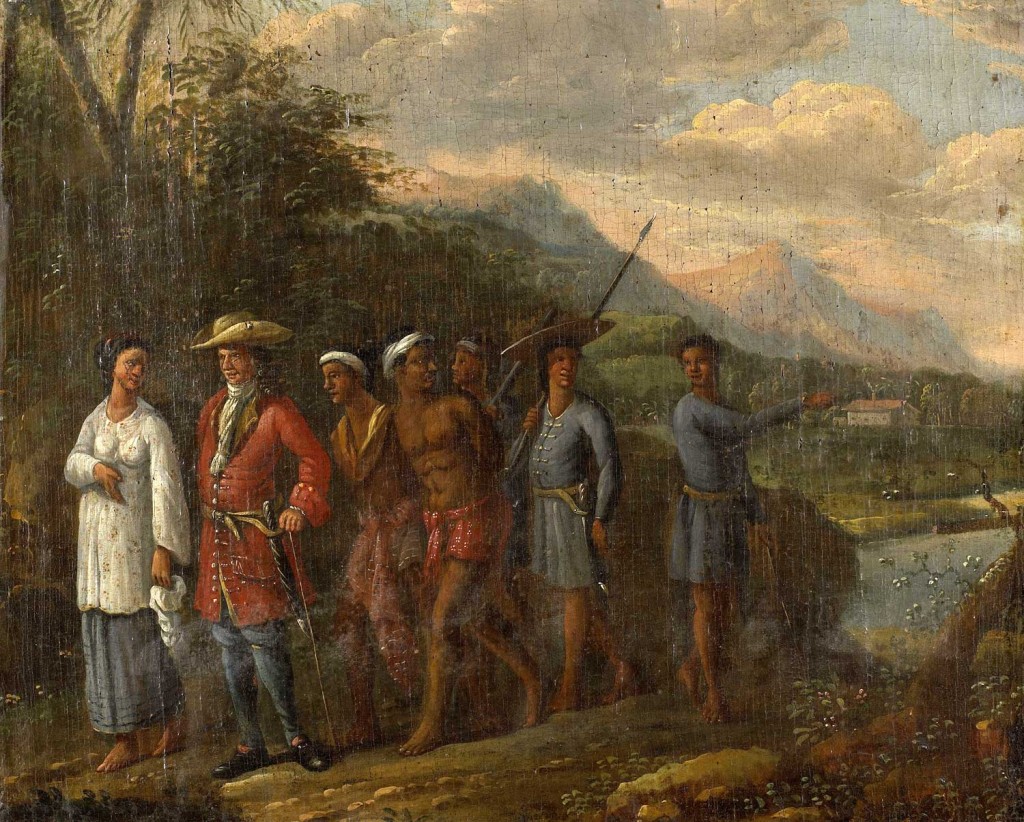 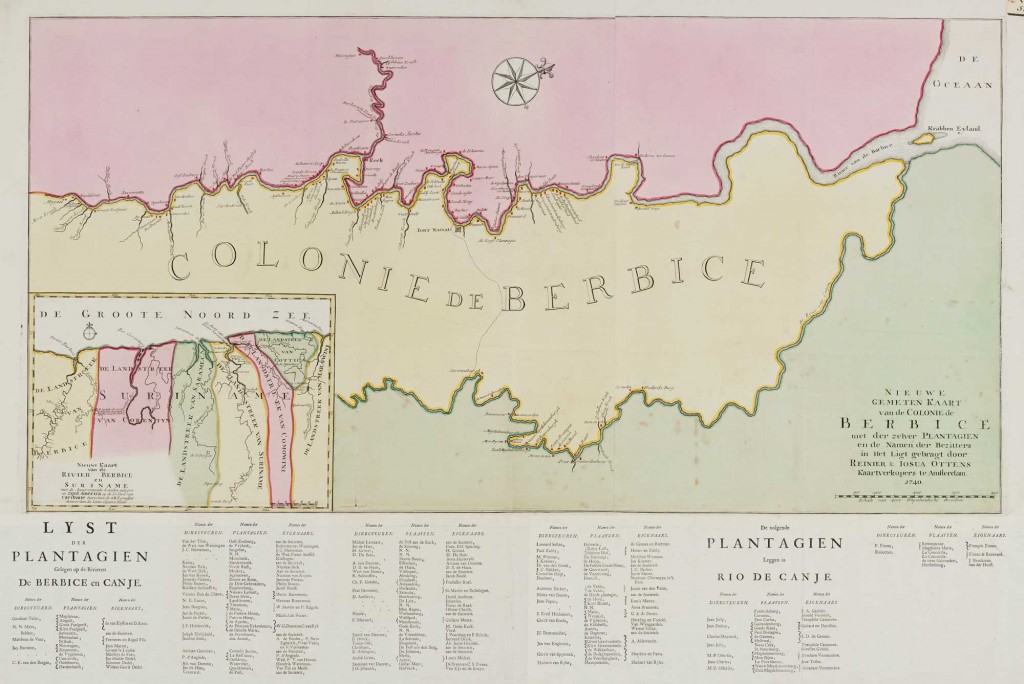 Berbice
Map of the Berbice Colony in Guyana, with a legend of plantations and owners. Engraving published by Reinier and Joshua Ottens, Amsterdam, 1740, 48.7×95.2 cm. Zeeland Archives, Zelandia Illustrata I, inv.nr 830. 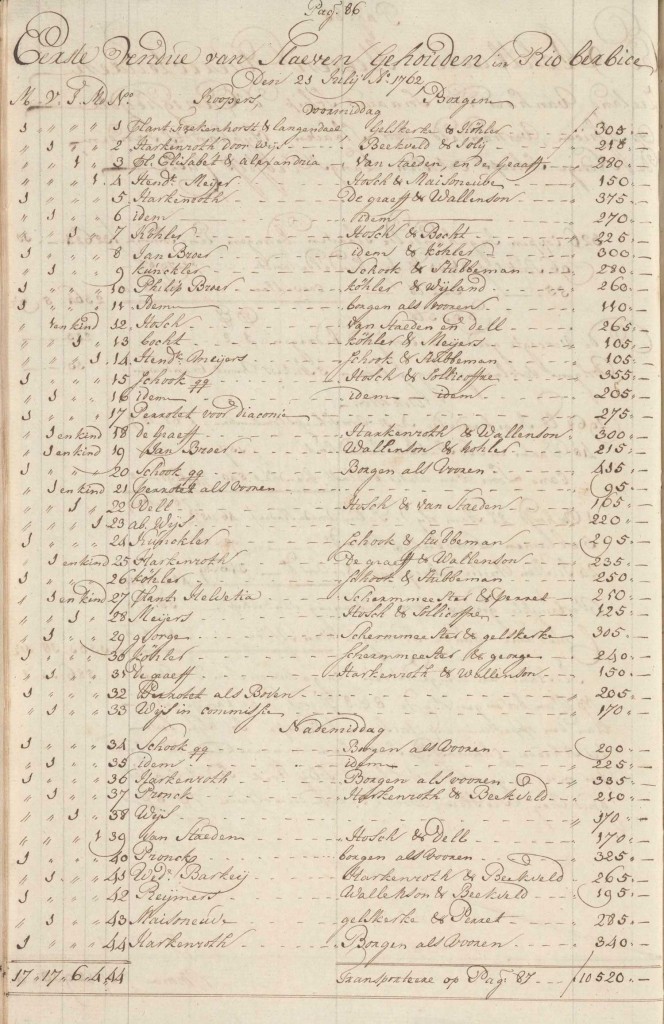 Auction of enslaved people at Berbice
First page of the auction report at Berbice from the ship The Unity. Zeeland Archives, Archives of the MCC, inv.nr 384.