With the pilot on board, The Unity hit the sandbank the Oosterrassen in the Westerschelde on March 23, 1763. The ship slid across the sandbank, almost losing its rudder in the process. Only one hook, also broken, kept the rudder in the place. The hull of the ship was cracked, and the ship began to take in water.

On the Keel of the Boat

The captain ordered the boat and rowboat to be put out, in order to lighten the weight of the ship. The cook Thomas Ditmars, the master cooper Adriaan Hillebrand and the sailor Jacobus van de Putte had barely taken place in the rowboat when it heeled over. Thomas and Adriaan were able to climb on top of the capsized vessel, but Jacobus immediately disappeared in the icy waves.

Putting out the boat also failed. It was damaged and drifted way to sea, together with the capsized rowboat. On the keel of the rowboat the cook and master cooper could still be seen, but the crew could do little beyond helplessly watching while the two men disappeared from sight.

Thanks to the rising tide The Unity was knocked lose. The captain sailed the ship into the Westerschelde between buoy 1 and 2, where he dropped anchor and fired of emergency shots. A steigerschuit (a barge with a high wales, which was used to load and unload ship’s cargoes) arrived from Flushing in the province of Zeeland, the NetherlandsVlissingen. Perhaps the barge was used to unload some goods and even carry some crew members, in order to lighten the ship. The captain ordered the anchor rope to be cut, which allowed The Unity to drift up the Schelde. At Vlissingen ship dropped anchor again.

The next day, March 24th, 1763, two carpenters came on board to repair the rudder, as well as four porters to begin preparations for unloading the cargo. At night the anchor was raised, and five in the morning on March 25th, 1763, the ship dropped anchor at the roadstead of Rammekens. Since hitting the sandbank, the pumps had been running continuously: every our 10 to 12 inches (about 25-30 cm) of water had been pumped out of the holds.

The captain blamed the pilot, Thomas Broad. It was his carelessness or miscalculation which caused The Unity to run into the sandbank – the crew could not be blamed. This is what the captain and nine crew members claimed in a statement before the Middelburg notary Marinus Smijtegelt on March 25th. The deed was drawn that same day on board of the ship – the notary had been rowed to the ship together with two witnesses. The nine crew members included: first mate Daniël Pruijmelaar, second mate Johan F. Schutz, third mate Adriaan de Puijt, boatswain Pieter Pietersen, boatswain’s mate Otto Westman, cooper’s mate Isaäck de Vos, master carpenter Pieter de Gerol and the sailors Jacobus Rankin and Cornelis de Hond.

After this the notary drew up another deed, this one only for captain Menkenveld. In it, Jan Menkenveld again emphasized the fact that he was not to be blamed for the damages incurred to the ship and any cargo on board. The notary wrote: “that the appearing party, knowing that previously described disasters could have resulted in damages to the ship or cargo, wishes to declare his protest against any damages incurred by the injuries of the sea before opening up the holds. Therefore requests that I, in my office of notary, would draw up such a deed, which is this one, to serve and ensure this, as is only right.”

End of the Voyage

While the notary was drawing up the abovementioned deeds, the unloading of the ship’s cargo was begun. With snow and hail the goods were loaded onto a punt, a flat-bottomed barge. The first goods to leave the ship were the three-pounder canon, 44 whole and 10 half hogsheads of sugar.

The next day, March 26th 1763, the captain went ashore, while the crew remained on board the ship, which was being pulled through the canal, from the Welsinge to Middelburg. Here, it arrived on March 27th, 1763, after which all the crew when ashore too. Friends and family stood on shore to welcome everyone, while the captain and first mate went to work with the administration. The ship’s payroll book and muster roll book were both closed. 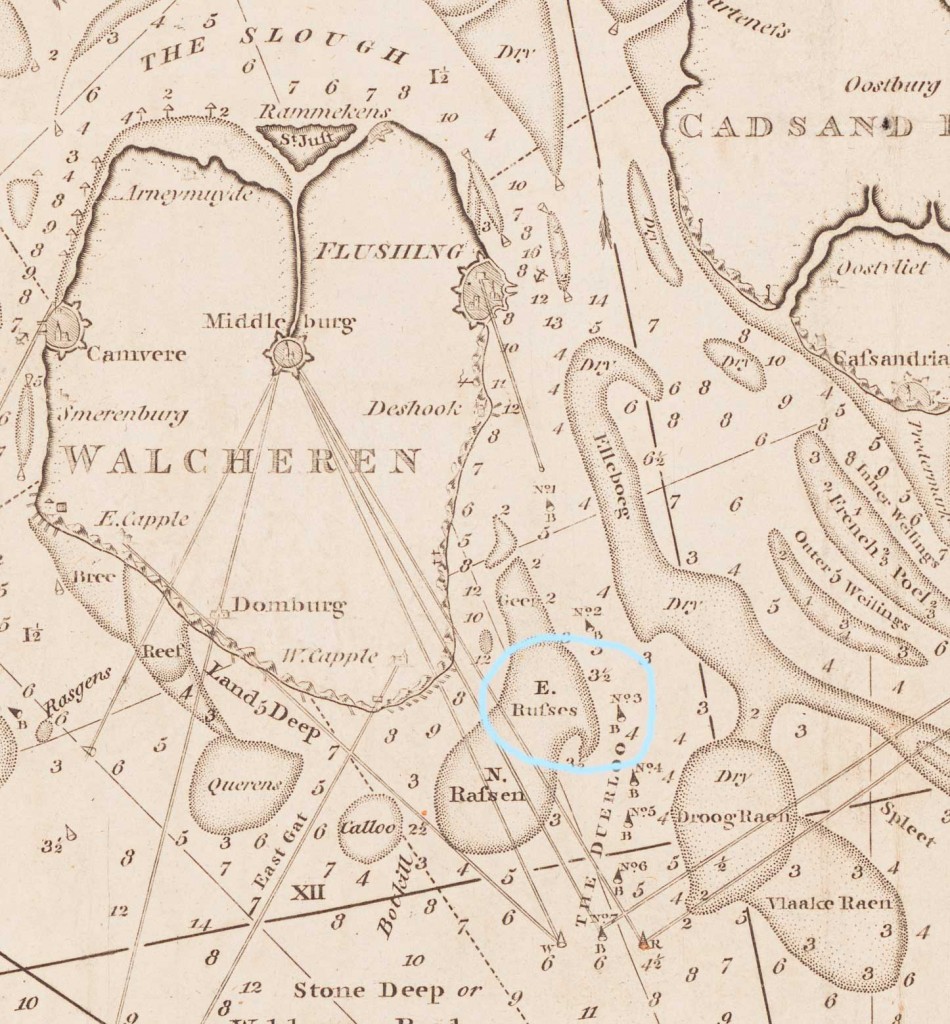 The Deurloo lane
The Deurloo lane in the Westerschelde near the Island of Walcheren. In blue the sandbank Oosterrassen. Zeeland Archives, Zelandia Illustrata ZI-0191 (detail). 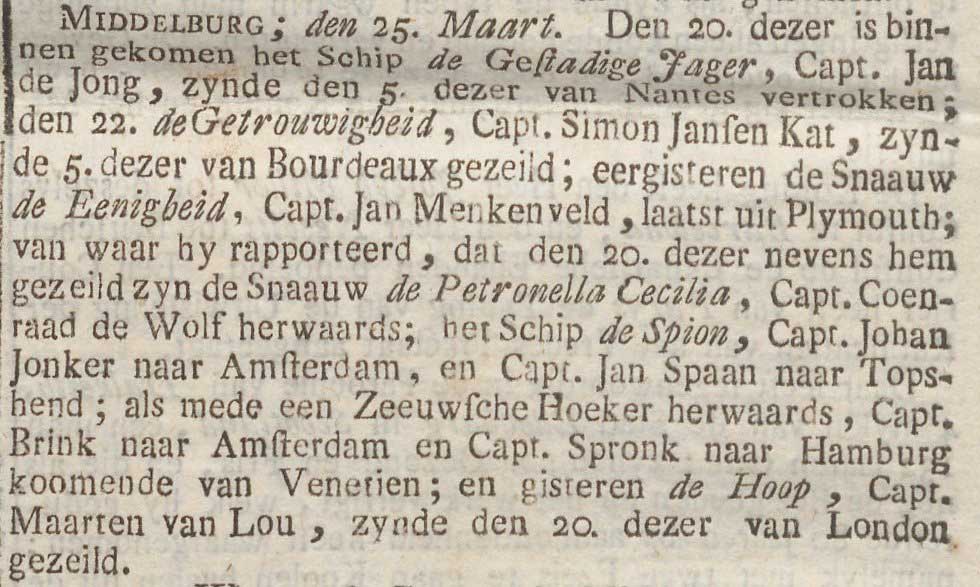