According to the further specific instructions, one of three sets of instructions which captain Menkenveld had received on his departure from Middelburg, the ship was sail for another port should prices in Berbice be too low. This appeared to be the case. After the second auction in the Berbice Colony on July 22, the captain ended the auction prematurely.

“However, if you notice that this would decrease the  prices, you will save a suitable remainder of 80 to 100 slaves and sell them in the colony of Essequibo and Demerara. This will be done via auction”

On July 27 the ship began to sail down the river Berbice in direction of Essequibo. On August 5, The Unity could be found at sea again, and received a pilot on board from the ship The Willem Zeelandus, which had just begun its voyage back to Middelburg. On August 7, the ship anchored at the plantation of lord Van Roden in Essequibo, where the captain left the ship to go to fort Zeelandia.

Examination by the Surgeon

Just as in Berbice the ship was visited by a surgeon who examined the slaves for contagious diseases. This took place on August 7: “In the morning a surgeon came on board to examine the slaves”. Again, the visit was a short one. That same afternoon The Unity raised anchor and sailed a little further up the river, to anchor at fort Zeelandia.

As soon as the ship had anchored at the fort, bananas were given to the enslaved Africans. This was done from August 8 till 18, before the auctions took place. The bananas were probably meant to help the slaves recover their strength and make them look healthier.

Adriaan Spoors was an MCC contact in the colonies of Essequibo and Demerara, as well as the auction master for The Unity. In addition, Adriaan Spoors functioned as the right hand of Laurens Storm van ‘s-Gravensande, director-general of Essequibo in the service of the West Indian Company (WIC).

On August 26, 1762, one week after the auctions, Adriaan Spoors wrote a letter to the MCC directors to notify them of the sales. He congratulated them with the ‘high, soaring prices’ which the enslaved people had fetched.

Spoors wrote a second letter on December 13, 1762, in which he assured the directors that he had sent the first payments of bills of exchange with The Unity.

While The Unity was in Essequibo it underwent some badly needed large-scale maintenance. On August 19, the day following the auctions, the beds for the enslaved were already taken out. Followed the next day by the demolition of the partition, the latrines and galley for the enslaved.

The ship itself was badly in need of repairs, as the entry of August 24 shows: “We took the fore rigging down and found it was in bad condition: 2 span was completely broken. The cap of the fore rigging was also rotten and the rest was in poor condition as well.”

The crew busied themselves with carpentry, applying resin, scraping decks clean, etc. Two African carpenters were hired to help caulk the ship. When they were finished doing so, on September 21, they went back to shore. The work on the ship would end up taking several months, since everything had to be checked – and many parts contained some measure of rot. The mice and rats had eaten holes into the sails, and many of the ropes were threadbare.

On September 2, 1762, first mate Pruijmelaar wrote down the following: “We fired 11 shots for the burial of the commander of the fort.” This probably concerned Commander Mennes.

On September 4, 1762, surgeon’s mate Louis Bernard left the ship with his possessions to stay in Essequibo. Surgeons were in high demand in the colonies. Due to diseases and mismanagement, most of them did not stay long.

On September 20 first mate Pruijmelaar mentioned a wedding in his logbook. The Unity fired seven shots at sunrise, eleven shots at noon and another seven at sundown. Some crew members were also sent ashore with the boat to fire blunderbusses throughout the day. 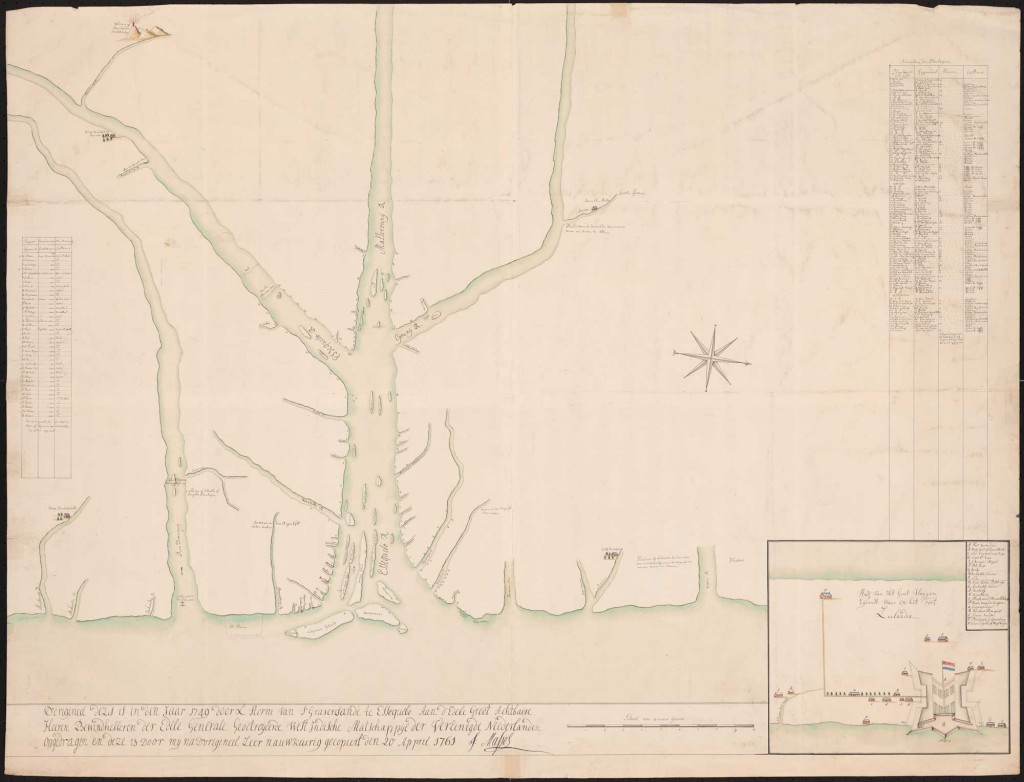 Essequibo
Map of the Essequibo Colony. Manuscript by J. Massol, dated to april 20, 1761, copy of the map by L. Storm of ’s-Gravensande in 1749 dedicated to the directors of the West-Indian Company (WIC), 75×108 cm. Zeeland Archives, Zelandia Illustrata I, inv.nr 1624. 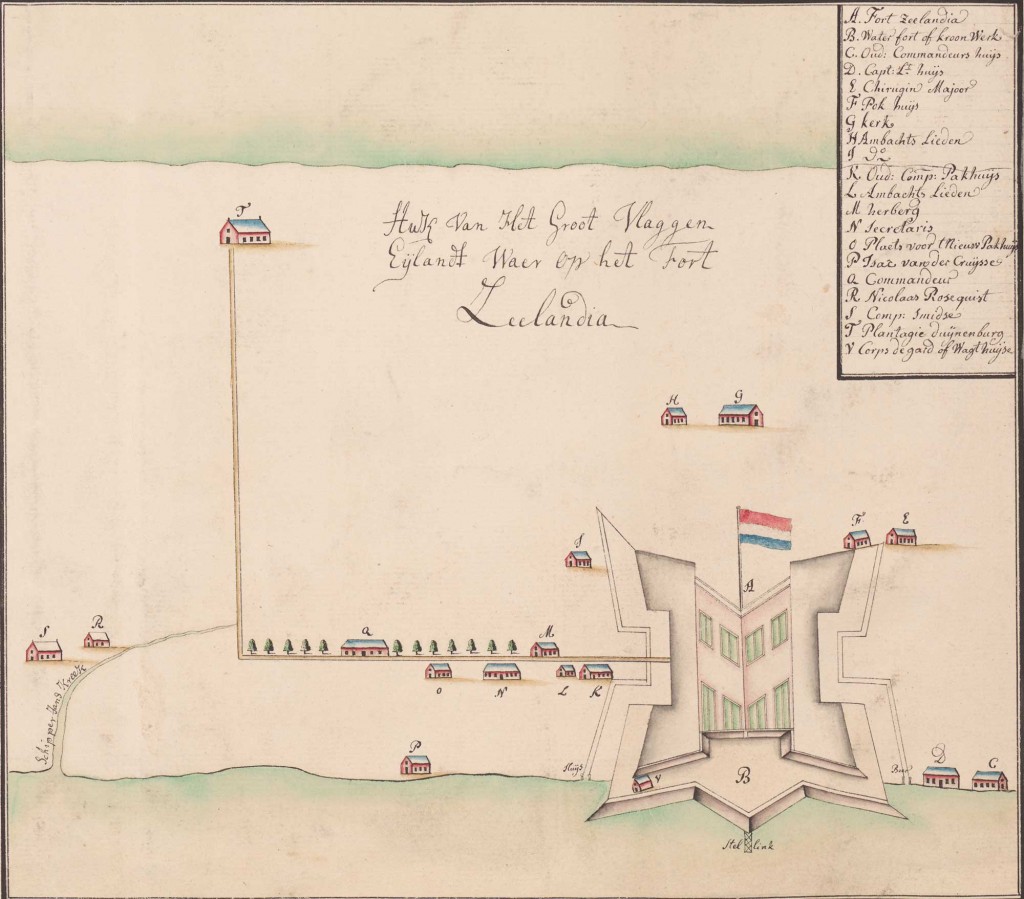 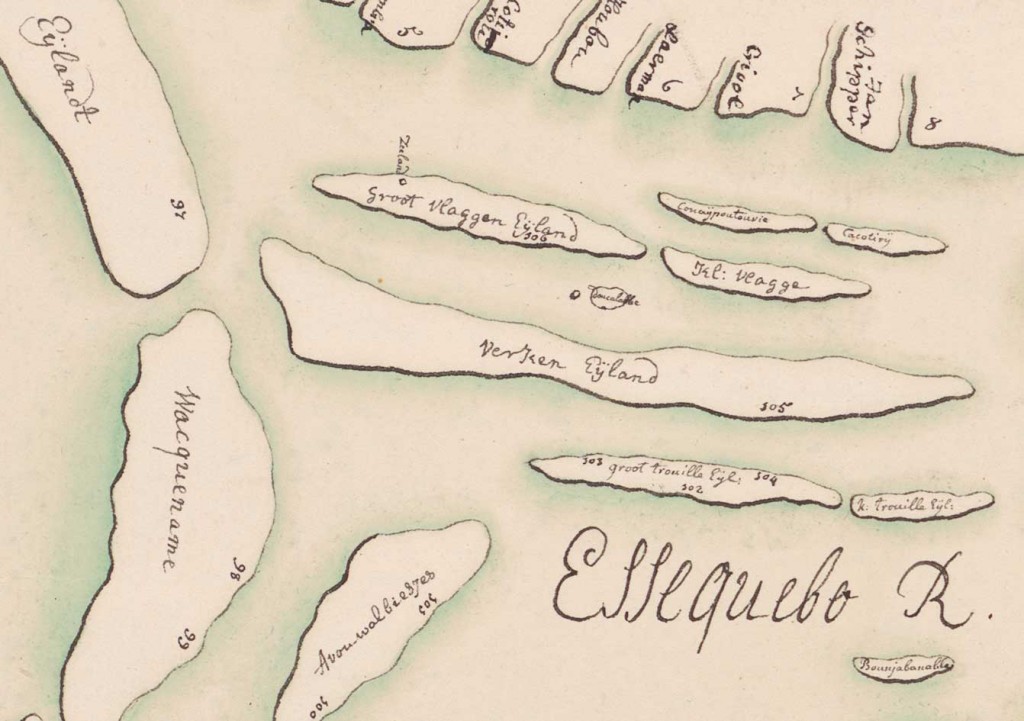