The Middelburgse Commercie Compagnie bought ships but also built its own. At the wharf of the MCC in Middelburg different types of ships were built: frigates, hookers, snows and yachts. Parts of olds ships, which were sometimes bought especially for this purpose, were reused in the construction.

The construction of the ship The Unity took 4 years, even though normally this would not take longer than one year. In 1755 the keel was laid (the old keel of a ship named the Grenadier) and after that the construction slowed down for a couple of years. In 1758 the ship was put into the water, and a year later the construction was was finally finished. The ship was prepared for the 1st voyage, a return voyage to Curaçao. 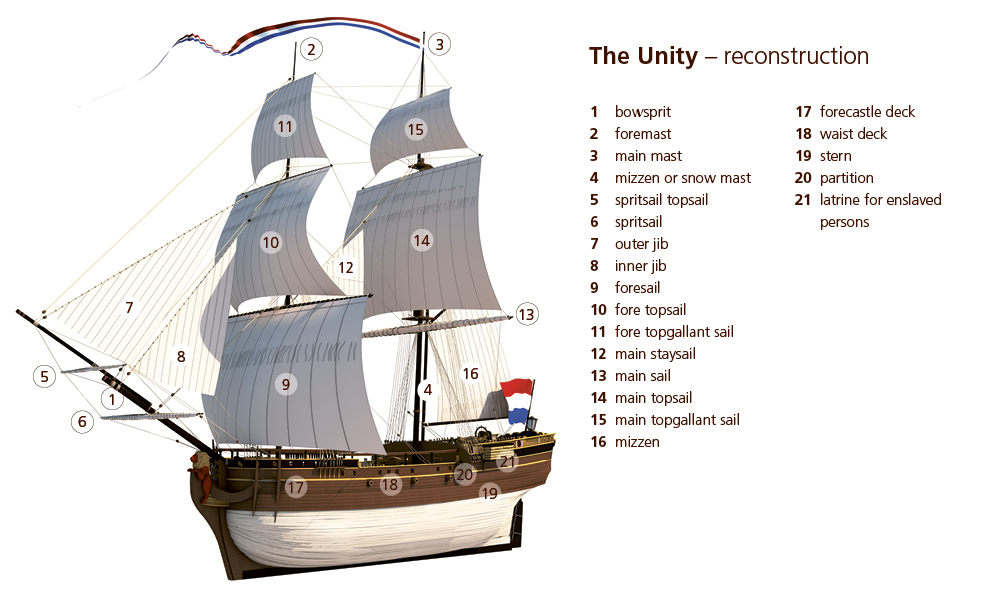 The ship was approximately 22.50 meters in length, 3.20 meters in depth and 7 meters in width. It contained one ‘tween deck with a height of nearly 1.40 meters. The volume was a little more than 170 m3. In old measurements: length over the stems 79 feet and 8 1/3 inches, hollow in the hold 11 feet and 4 inches, wide on the freeboard 24 feet and 9 1/3 inches, ‘tween decks 4 feet and 9 inches. Volume together 60 ¾ lasts. In the construction Amsterdam measurement were used.

During the 3rd voyage the ship was armed with 10 canons placed on gun carriages (6 three-pounders and 4 two-pounders) and 6 swivel guns. Swivel guns were canons of a smaller caliber that were attached to the ship’s plank and that could be rotated into any direction.

The equipage of The Unity included a boat and a shallop. Both were taken on board when the ship was at sea and were put overboard when the ship was near the coast. The boat, an open vessel that could be moved both by rowing and by using sails, was the largest of the two. It was equipped with a small mast, a fore sail and a jib sail. During the triangle voyages of the MCC the boat was used, for example, to trade independently from the ship. The equipment of the boat included, for example, an iron kettle for the preparation of food.

Name of the ship

The name ‘Unity’ was given at the beginning of the ship’s construction by the chair of the board of directors of the MCC, Joost van Huijen. Unity meant solidarity or union, and the word was often used to describe international relations. ‘Bonds of unity and friendship’ were emphasized between countries that formed an alliance.

The naming might have been connected to the political situation in 1755. In that year, the Barrier Treaty, which was signed in 1715 between the sea powers Great Britain and the Dutch Republic, was under a lot of pressure. In the border treaty the Republic had been given more Flamish ground, due to their insistence that Zeeland needed to be well-defended. The following year Prussia formed close relations with Great Britain, while Austria allied with France. Each side was joined by other, smaller European powers and states, and on May 15 1765 the Seven Years’ War broke uit. Due to internal strife and neglected army and navy the Republic insisted on taking a neutral stance – putting itself in a rather powerless situation in which they could not do anything to defend themselves against violations on their southern border.

The name of the ship was portrayed in the figure head of a lion. Sculptor Adriaan van der Bilt from Middelburg made the figure head, as well as the other decorations. This included the carved decorations on the upper part of the stern, the carvings between the two lanterns that crowned the corners of the stern and the ribbon which bore the name of the ship on the lower stern.

The first two voyages of The Unity were return voyages to Curaçao and the Caribbean. The third voyage became the first triangle voyage or voyage with enslaved Africans of the ship. During a triangle voyage the ship first sails to West Africa, next over the Atlantic Ocean to the West Indies (Caribbean/South America/North America) and then back to the home port in Europe. The ship The Unity was given a much larger crew (36 heads in stead of 18 heads) and an experienced captain who had already made 5 slave voyages as a captain.

The decision to undertake this 3rd voyage was taken on 21 July 1761 by the board of directors of the MCC. On 1 October the crew of the Unity set its sails. The preparations had, therefore, taken less than 3 months.